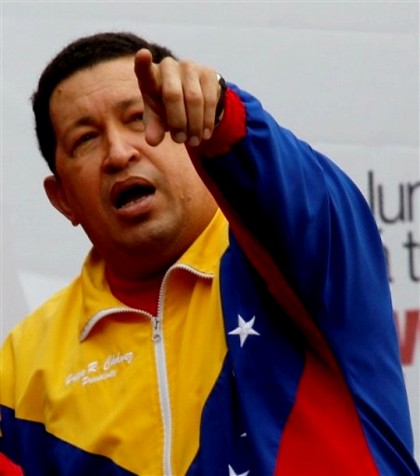 CARACAS, March 1, 2011 (KATAKAMI.COM)  – Venezuela’s President Hugo Chavez proposed on Monday an international mediation effort to seek a peaceful solution to the uprising against his friend and political ally Muammar Gaddafi of Libya.
As reported by Iranian Press TV, the firebrand South American socialist leader said he had already discussed the idea with some members of the ALBA bloc of left-wing Latin American nations and some other countries in Europe and South America.
“I hope we can create a commission that goes to Libya to talk with the government and the opposition leaders,” he said in a speech on live TV. “We want a peaceful solution … We support peace in the Arab world and in the whole world.”
The United States and other foreign governments discussed military options on Monday as the Libyan leader scoffed at the threat from a spreading popular uprising and forces loyal to him massed in the country’s west.
Without giving further details of the proposed mediation mission, Chavez said it was better to seek “a political solution instead of sending marines to Libya, and better to send a goodwill mission than for the killing to continue.”
Along with leftist Latin American governments in Cuba and Nicaragua, Venezuela has alleged that Western powers want to occupy the North African nation for its oil wealth.
Chavez, who is the main critic of US power in the region, has showered Gaddafi with gifts and praise as a fellow revolutionary on six visits to Libya since he won office in the South American OPEC member in 1998.
Gaddafi came to Venezuela in 2009, giving Chavez a Bedouin tent and receiving a replica copy of the sword of South American independence hero Simon Bolivar.
The Venezuelan said it would be hypocritical of him to join the chorus of international condemnation of Gaddafi now.
“As everyone says today that Gaddafi is a murderer, then Chavez has to say so too? I’m not convinced,” he said.
“I am not going to condemn from afar. That would be cowardly with someone who has been my friend and our friend for a long time, without knowing what is happening in Libya … I am not a coward, I am not fickle.”
Chavez opponents say his links with Gaddafi, and refusal to condemn his violence against opponents, demonstrate the similarly autocratic nature of the Venezuelan leader.
Pro-opposition newspapers have been showing daily pictures of the two men together at past meetings.   (*)
0.000000 0.000000
Comments Off on Venezuela’s Chavez wants mediation in Libya 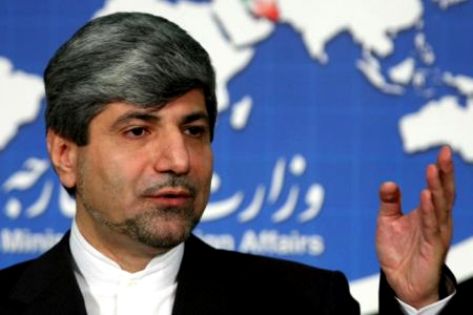 “This issue that we have repeatedly informed P5+1 about our readiness show that we will pursue the path of negotiations if these countries are ready to hold talks about cooperation without taking sides and if they place emphasis on interaction and not confrontation,” Mehmanparast told reporters at his weekly press conference on Tuesday.

His comments came a day after a closed-door meeting between Iranian Foreign Minister Ali Akbar Salehi and EU’s foreign policy chief Catherine Ashton in the Swiss city of Geneva on Monday.

Salehi expressed hope that the meeting would facilitate the work for the upcoming meeting with the five permanent members of the United Nations Security Council plus Germany.

Mehmanparast pointed to the meeting between Salehi and Ashton and said, “In this meeting, Iran emphasizes its readiness to cooperate with P5+1 on common issues.”

He also pointed to the latest report released by the International Atomic Energy Agency (IAEA) Director General Yukiya Amano on Iran’s nuclear program and said, “The story of alleged studies is an old and repeated story which has no legal basis at all.”

“It runs counter to a trend that the IAEA should follow with regard to its committed members,” the Iranian spokesperson added.

He emphasized that the legal path of the IAEA should not be affected by Western powers’ pressure.

In its latest report issued on Friday, the UN nuclear agency once again confirmed that Iran’s nuclear program has never been diverted to nuclear weapons production.

The report, however, urges Tehran to halt its uranium enrichment activities, as demanded by four resolutions previously imposed by the United Nations Security Council.

Amano’s latest document is a prelude to the upcoming traditional spring meeting of the IAEA’s Board of Governors, which is scheduled to convene March 7-11.

Iran has vehemently rejected allegations against its nuclear program, saying it needs nuclear energy to meet its growing domestic demand for electricity and to provide fuel for the Tehran research reactor, which produces medical isotopes for cancer treatment.   (*) 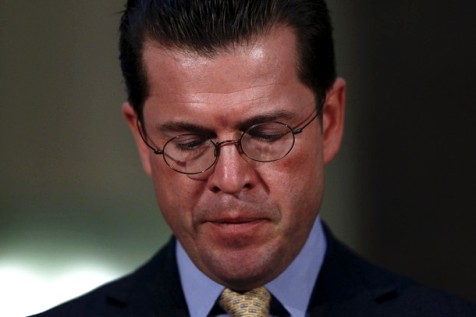 German Defence Minister Karl-Theodor zu Guttenberg announces his resignation from all political offices in Berlin, March 1, 2011. Guttenberg, the most popular member of Chancellor Angela Merkel's cabinet, has been embroiled in a plagiarism row. Merkel had defended Guttenberg and analysts said he was important for conservative party hopes in three state elections later this month. REUTERS/Fabrizio Bensch

BERLIN (KATAKAMI.COM / AP) — Germany’s defense minister, a rising star in Chancellor Angela Merkel’s conservative bloc and the country’s most popular politician, has resigned over allegations he plagiarized his doctoral thesis, as reported by AP.

Karl-Theodor zu Guttenberg told reporters Tuesday he felt that he could no longer carry out his duties as minister.

Guttenberg had admitted “grave mistakes” in his 2007 thesis but insisted he did not intentionally copy it. Bayreuth University revoked Guttenberg’s doctoral title last week.  (*) 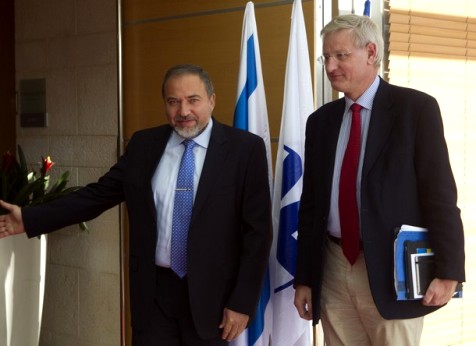 sraeli Foreign Minister Avigdor Lieberman (L) welcomes his Swedish counterpart Carl Bildt in Jerusalem on March 1, 2011, one day after the latter's meeting with Palestinian leader Mahmud Abbas in the West Bank amid international efforts to revive peace talks between Israel and the Palestinians. (Photo by JACK GUEZ/AFP/Getty Images) 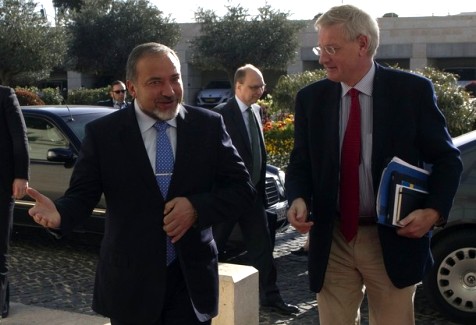 Palestinian President Mahmoud Abbas (R) shakes hands with Sweden's Minister of Foreign Affairs Carl Bildt as they meet on February 28, 2011 in Ramallah, West Bank. Bildt met with Abbas following talks the previous day with the Jordanian King, Prime Minister and Foreign Minister, which focused on European efforts to revive peace talks between Israel and the Palestinians. (Photo by Omar Rashidi/PPO via Getty Images)

March 1, 2011 (KATAKAMI.COM / BBC) — Libyan leader Col Muammar Gaddafi has told the BBC he is loved by all his people and has denied there have been any protests in Tripoli.

Col Gaddafi said that his people would die to protect him.

He laughed at the suggestion he would leave Libya and said that he felt betrayed by the world leaders who had urged him to quit.

US ambassador to the UN Susan Rice said the interview showed Col Gaddafi was “delusional” and “unfit to lead”.

Col Gaddafi is facing a massive challenge to his 41-year rule, with protesters in control of towns in the east.

Col Gaddafi was speaking in an interview with the BBC Middle East editor Jeremy Bowen in Tripoli.

Col Gaddafi accused Western countries of abandoning Libya and said that they had no morals and wanted to colonise the country.

When asked whether he would resign, he said he could not step down as he did not have an official position and insisted that the power was with the people.

Col Gaddafi challenged those, including UK Prime Minister David Cameron, who have accused him of having money abroad, to produce evidence.

He said he would “put two fingers in their eye”.

Col Gaddafi said true Libyans had not demonstrated but those who had come on to the streets were under the influence of drugs supplied by al-Qaeda.

He said those people had seized weapons and that his supporters were under orders not to shoot back.

Earlier, foreign ministers who had gathered at a UN human rights conference in Geneva called for Col Gaddafi to go.

US Secretary of State Hillary Clinton accused Col Gaddafi and his followers of using “mercenaries and thugs” to attack unarmed civilians, and of executing soldiers who refused to turn their guns on fellow citizens.

“It is time for Gaddafi to go, now, without further violence or delay,” she said.

Mrs Clinton also said that although US naval vessels were being repositioned near Libya there was no military action pending.

When asked whether the US would back Col Gaddafi going into exile, Mrs Clinton said: “If violence could be ended by his leaving… it might be a good step but we believe accountability must be obtained for what he has done.”

The US Treasury said it had blocked $30bn (£18.5bn) in Libyan assets – the largest sum it had ever frozen.

US President Barack Obama met UN Secretary General Ban Ki-moon at the White House on Monday and both expressed concern at the rising violence and called for a legitimately elected president.

Mr Ban said of Col Gaddafi: “He lost legitimacy when he declared war on his people.”

Although protesters have secured towns in the east, Col Gaddafi shows no signs of giving up in and around Tripoli.

In Tajoura, a suburb of the capital, about 400 people protested against him on Monday, chanting: “The blood of martyrs won’t go to waste.” Gaddafi supporters have reportedly tried to break up the protest by firing into the air.

Reporters say there have been long queues at banks in the capital as people tried to collect the 500 dinars ($410) promised to all families by the government in an attempt to quell the unrest.

There has been fighting in the coastal town of Misrata, 200km (125 miles) east of Tripoli, with Col Gaddafi’s opponents repelling a government counter-attack.

Anti-government forces still control Zawiya, 50km west of Tripoli, but pro-Gaddafi forces are surrounding the city. One resident told Reuters: “We are expecting attacks at any moment… They are in large numbers.”

Deputy foreign minister Khaled Kaim said the authorities would attempt to talk to protesters in the east, but added: “If all attempts and efforts for dialogue… are exhausted, a very well guided force will be used in accordance with international rules.”

About 100,000 people have fled anti-government unrest in Libya over the past week, the UN estimates.

The exodus of Egyptian workers from western Libya began on Wednesday, but has since been intensifying, says the BBC’s Jim Muir at the Ras Jdir border crossing with Tunisia. About 1,000 people an hour are crossing into Tunisia, he says.   (*) 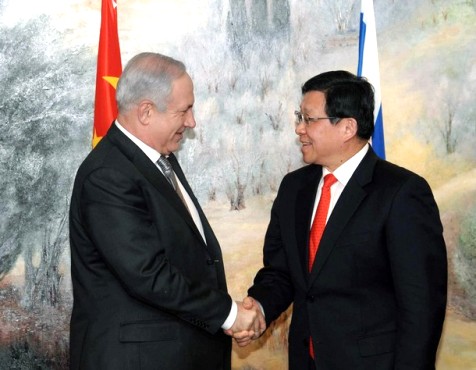