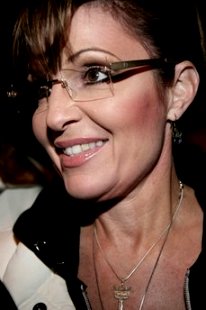 Former Alaska Gov. Sarah Palin arrives to the Western Wall tunnels in Jerusalem's Old City, Sunday, March 20, 2011. Palin is in Israel on a trip that has raised speculation she is honing her foreign policy credentials ahead of a run for the U.S. presidency next year. Palin arrived in Israel Sunday afternoon after a stop in India. (AP Photo/Daniel Bar On)

JERUSALEM, March 21, 2011 (KATAKAMI.COM) — Former Alaska Gov. Sarah Palin visited a Jewish holy site in Jerusalem soon after arriving in Israel Sunday on a trip that has raised speculation she is honing her foreign policy credentials before a run for the U.S. presidency next year.

As reported by AP on Sunday, Palin arrived in Israel Sunday after visiting India.
Palin, who was John McCain’s running mate in his failed 2008 campaign for president, rarely travels abroad and has been criticized for a weak foreign policy record.
Palin did not comment to Israeli reporters at the airport and was whisked away in a white van.
Although the trip is private, she is to meet with Prime Minister Benjamin Netanyahu on Monday.
“As the world confronts sweeping changes and new realities, I look forward to meeting with Prime Minister Netanyahu to discuss the key issues facing his country, our ally Israel,” Palin said in a statement.
Palin toured holy sites in Jerusalem’s Old City Sunday evening as Israelis celebrated the Jewish festival of Purim.
“Israel is absolutely beautiful and it is overwhelming to see and touch the cornerstone of our faith and I am so grateful to get to be here,” Palin told reporters. “I’m very thankful to know that the Israeli and American link will grow in strength as we seek peace along with you,” Palin said.
She visited the Western Wall, a retaining wall of the compound where the biblical temples stood 2,000 years ago and which is now the holiest place where Jews can pray.
The Al-Aqsa Mosque compound, Islam’s third-holiest site, was built in the seventh century atop the ruins.
Palin returns to the U.S. Tuesday.   (*)