Chinese Vice Premier Wang Qishan (L) shakes hands with Kenyan President Mwai Kibaki in Nairobi, Kenya, on March 18, 2011. As reported by XINHUA NEWS on Friday, Chinese Vice Premier Wang Qishan held talks with Kenyan Prime Minister Raila Odinga in Nairobi on Friday, during which he made suggestions on how to further expand bilateral pragmatic cooperation in the future. Wang said that China would like to work with Kenya to enhance traditional cooperative relations between the two countries. He said improvement in cooperation mechanisms should be made to further strengthen planning and guidance for bilateral economic and trade cooperation. China should expand its aid to Kenya to actively implement Kenya-related projects under the frame of Sino-African Cooperation Forum, he said. The vice premier vowed to encourage China's enterprises to enlarge the volume of imports from Kenya in a bid to promote balanced development of mutual trade, stressing that China should provide supports to more Chinese enterprises to invest in Kenya while Kenya should further improve its investment environment and put forward relevant incentive policies. He also relayed cordial greetings of Chinese Premier Wen Jiabao to Odinga. Odinga said Kenya would never forget that China has been lending a helping hand when Kenya experiences its hard time. (Xinhua/Zhao Yingquan)

Chinese Vice Premier Wang Qishan (L) meets with Kenyan Vice President Kalonzo Musyoka in Nairobi, capital of Kenya, March 18, 2011. As reported by XINHUA NEWS on Friday, Chinese Vice Premier Wang Qishan held talks with Kenyan Vice President Kalonzo Musyoka in Nairobi on Friday, exchanging in-depth views on further promoting China- Kenya relationship as well as major international and regional issues of common interest. During the talks, Wang noticed that the bilateral relations had been developing steadily since the establishment of China-Kenya diplomatic ties 47 years ago and in particular, since the establishment of the bilateral friendly cooperative relations of long-term stability and mutual benefit in 2005, such relations have maintained good momentum for progress. The depth and scope of China-Kenya cooperation has been on the forefront of Sino-African cooperation. Wang said that China attaches great importance to its relations with Kenya which has been treated as China's sincere friend and key cooperation partner. China would like to work along with Kenya to push the friendly cooperative relations to a higher level and also to deepen the new Sino-African strategic partnership through closer communication with the African countries including Kenya. Musyoka commended the Chinese government for its continuous financial support which he said has contributed tremendously towards developing the country's infrastructure, agricultural, education, water and health sectors. Musyoka stressed that Kenya resolutely pursues the one-China policy and attaches great importance to the relations with China. He called on the Chinese government to diversify their investment in Kenya and strengthen bilateral cooperation in trade, tourism, infrastructure construction. At the invitation of the government of Kenya, a delegation led by Wang arrived here for official visit to Kenya from Thursday to Sunday, which is also the first leg of the vice premier's three- African countries-visit followed by Zimbabwe and Angola. (Xinhua/Zhao Yingquan)

Posted by BLOG INDONESIA KATAKAMI on March 19, 2011 in World News 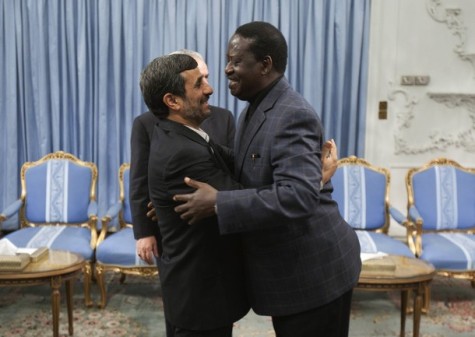 Posted by BLOG INDONESIA KATAKAMI on March 7, 2011 in World News

March 7, 2011 (KATAKAMI.COM) — Iranian President Mahmoud Ahmadinejad said on Sunday (6/3/2011) that Iran and Kenya have broad areas for cooperation.
President Ahmadinejad made the remarks in a meeting with Kenyan Prime Minister Raila Odinga in Tehran.
He said that both Iran and Kenya are eager to further enhance their cooperation particularly in view of the ongoing international developments.
‘Iran and Kenya are in the same front. The common culture and viewpoints of both countries have made them get closer to each other,’ President Ahmadinejad added.
Referring to great potentials for increasing the level of cooperation between Iran and Kenya, he noted that Iran and Kenya can take effective steps in consolidating their bilateral ties through further cooperation in economic, political and cultural areas.
President Ahmadinejad emphasized the importance of paying heed to banking and customs infrastructure of both countries in order to enhance bilateral industrial and commercial cooperation.
“Kenya is one of the main centers for independence-seeking movements in Africa. Hence, it enjoys a special status in thought and culture of the Iranian nation,” he added.
Kenyan Prime Minister Raila Odinga for his part said that Kenya as a trading center in east Africa pays heed to broaden ties in all arenas.
He also said that his country is willing to further consolidate its political and international cooperation with Iran.   (*)

Posted by BLOG INDONESIA KATAKAMI on March 7, 2011 in World News

Kenya's president Mwai Kibaki looks at military jets as they parade during commemorations of Kenya's 47th Independence anniversary (47th Jamhuri day) on December 12, 2010 at the Nyayo national stadium in Nairobi, the day Kenya was established as a republic on December 12, 1963. (Photo by SIMON MAINA/AFP/Getty Images)

Kenya security forces march during commemorations of Kenya's 47th Independence anniversary (47th Jamhuri day) on December 12, 2010 at the Nyayo national stadium in Nairobi, the day Kenya was established as a republic on December 12, 1963. (Photo by SIMON MAINA/AFP/Getty Images) 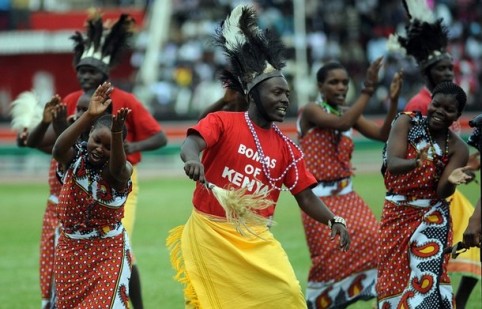 Dancers of the Bomas in Kenya dance during commemorations of Kenya's 47th Independence anniversary (47th Jamhuri day) on December 12, 2010 at the Nyayo national stadium in Nairobi, the day Kenya was established as a republic on December 12, 1963. (Photo by SIMON MAINA/AFP/Getty Images)

Kenya's Airforce personnel march during commemorations of Kenya's 47th Independence anniversary December 12, 2010 at the Nyayo national stadium in Nairobi, the day Kenya was established as a republic on December 12, 1963. (Photo by SIMON MAINA/AFP/Getty Images)

Comments Off on Photostream : Commemorations of Kenya's 47th Independence anniversary

Posted by BLOG INDONESIA KATAKAMI on December 13, 2010 in World News