Chinese Premier Wen Jiabao is seen in India 2010. Reining in prices is China's "top priority" in 2011, according to a speech Wen was to deliver to the nation's parliament Saturday, which reiterated a four percent inflation goal. (AFP/File/Pedro Ugarte)

BEIJING, March 5, 2011 (KATAKAMI.COM / AFP) – Reining in prices is China’s “top priority” in 2011, according to a speech Premier Wen Jiabao was to deliver to the nation’s parliament Saturday, which reiterated a four percent inflation goal, AFP reported on Saturday.

The world’s second-largest economy will target eight percent growth this year, and seven percent growth in the 2011-2015 period, Wen was to say, as he outlined the country’s priorities for the coming year.

The premier acknowledged that the communist leadership has “not yet fundamentally solved a number of issues that the masses feel strongly about” — from price rises to illegal land grabs to corruption.

“Recent prices have risen fairly quickly and inflation expectations have increased,” Wen was to say.

“This problem concerns the people’s well-being, bears on overall interests and affects social stability. We must therefore make it our top priority in macroeconomic control to keep overall price levels stable.”

Soaring prices of food, housing and other essentials have become the top public concern in China and Wen’s “state of the nation” speech to the rubber-stamp parliament pledged new efforts to contain the problem.

“We will resolutely regulate the housing market. We will act more quickly to improve the long-term mechanism for regulating the real estate market,” he was to say, according to the text.

China aims to “generally stabilise housing prices and meet the reasonable demands of residents for housing,” Wen was to say.

China announced last month that January inflation remained stubbornly high at 4.9 percent despite a series of measures taken to dampen price rises, including three interest rate hikes in the past four months.

The consumer price index, the main inflation gauge, had hit a more than two-year high of 5.1 in November.

The urgency of addressing key social issues has been underlined in the past two weeks by mysterious Internet calls for weekly Sunday “strolling” rallies in major cities, which have largely fizzled under a smothering security presence.

Wen noted the “large income gap” dividing rich and poor, as well as the need to boost minimum wages.

Shanghai’s municipal government said earlier this week it would raise the minimum wage 14 percent, taking the figure in the financial hub to 1,280 yuan ($194) per month from 1,120 yuan.

Local authorities across China have been raising minimum wages to help boost domestic consumption and relieve pressure on households struggling to keep up with rising food and property prices.   (*)

Posted by BLOG INDONESIA KATAKAMI on March 5, 2011 in World News 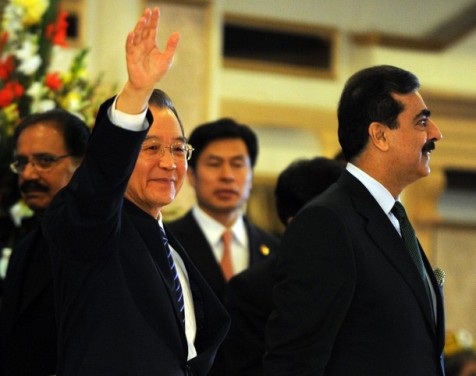 Chinese Premier Wen Jiabao (L) is flanked by his Pakistani counterpart Yousuf Raza Gilani (R) as he waves to Pakistan-China businessmen as they arrive to attend Pakistan-China Business Cooperation Summit in Islamabad on December 18, 2010. China and Pakistan concluded another 10 billion dollars' worth of deals on December 18, as Chinese Premier Wen Jiabao said Beijing would "never give up" on the troubled nuclear-armed Muslim country. (Photo by AAMIR QURESHI/AFP/Getty Images)

Mr. Wen addressed a joint session of parliament, telling the lawmakers China’s stance is “firm and clear” that it is willing to work with Pakistan and the international community to make an “unremitting effort to combat terrorism.”

The premier said in his parliament address the “symptoms and root cause” of terrorism need to be eliminated.

Pakistan’s porous border with Afghanistan is widely seen as a haven for militants.

Pakistan and China signed a number of business deals worth billions of dollars during Mr. Wen’s visit.

Officials say the deals aim to promote cooperation in the energy sector.

Pakistan says China has also agreed to provide $229 million to Pakistan to rebuild from floods that devastated much of the county, and another $400 million in loans.

Posted by BLOG INDONESIA KATAKAMI on December 19, 2010 in World News

December 13, 2010 (KATAKAMI) — Cambodian Prime Minister Hun Sen on Monday left here for Beijing, China to pay an official visit from Dec. 13 – 17 at the invitation of his Chinese counterpart, Wen Jiabao.

He was accompanied by Deputy Prime Minister Hor Namhong, minister of foreign affairs and international cooperation, Cham Prasidh, minister of commerce and other high-ranking officials.

The premier said on Sunday that his visit to China is aimed to strengthen friendly relations between the two countries in various fields and learn Chinese experience to help develop the country.

During his five-day visit, Hun Sen will pay courtesy calls on Chinese President Hu Jintao, Chairman of the Standing Committee of the National People’s Congress Wu Bangguo and will hold talk with Premier Wen Jiabao. He will also receive in a Royal Audience by former king Norodom Sihanouk, who is in Beijing for medical treatment, according to a press release of the Ministry of Foreign Affairs and International Cooperation.

Moreover, apart from Beijing, Hun Sen will also visit other Chinese cities: Tianjin, Wuxi, Suzhou and Nanjing, and will sign more than dozen documents with China.   (*)

Comments Off on Cambodian PM leaves for China for official visit

Posted by BLOG INDONESIA KATAKAMI on December 13, 2010 in World News 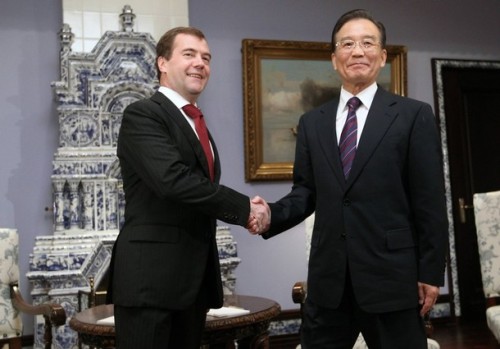 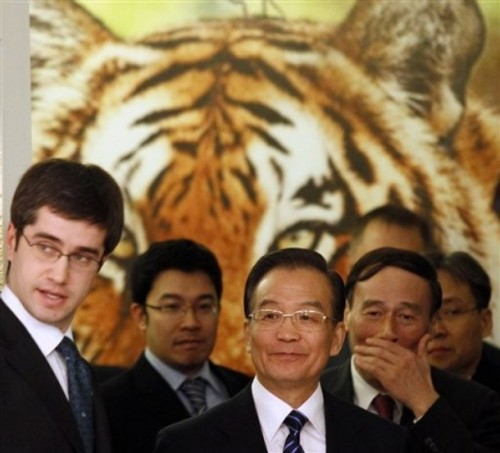 Chinese Prime Minister Wen Jiabao, center, prior to his meeting with his Russian counterpart Vladimir Putin, in St.Petersburg, Russia, Tuesday, Nov. 23, 2010. The Chinese Prime Minister will be taking part in the International Tiger Forum. Demand in China poses the greatest threat to tigers in the wild and organized crime runs the illicit trade in the world's largest felines, international experts said. (Getty Images / AP Photo/Dmitry Lovetsky)

Posted by BLOG INDONESIA KATAKAMI on November 24, 2010 in World News

Posted by BLOG INDONESIA KATAKAMI on November 18, 2010 in World News